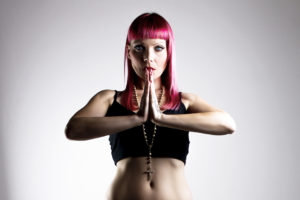 Pinklady out from Milan – Italy,
is one of the most renown Djane in France, in Switzerland, the UK and Germany.
She has shared the Decks with notable talents such as Chris Bekker DJ-PRODUCER from renown Label Vandit.
Actually She is on a regular rotation on several Radio Stations in Switzerland and France.
Her Professional Musical journey kicked in Year 2009 and her first break came with her very first Release the Single “Body Language” entering the Italian Pop Charts.
Later that year she released the Album”We Are Famous” featuring the hit Track “Bad Girl” and followed up with another Single “Bailando Con Ti” dedicated to Children with Down syndrome, which created such a buzz, that it was picked up for a program by RAI TV a main Italian Television Station.
In 2010, she travels to Zurich, and debuts with Pino Quaresima, from PINOMUSIC a label based in Switzerland, and collaborate on some projects with him.
She also releases a new single “Touch My Body” which has been included on various top Swiss and French Music Compilations.
Later that year she produces the “PINK SUNSET COMPILATION” dedicated to the International Electro – House Community.
Her rise and recognition eventually get her featured in the International renown “Street Parade” in Zurich, Switzerland which amasses over 1 Million Party goers.
And subsequently the following years, 2011, 2012, 2013, 2014 and 2015.
The Year 2011 her Singles “Face to Face” and “Game of Love” are taken for Televised Fashion shows in Switzerland and France. That year she gets booked to the “My Special Car” an Italian Car Show where she introduced her Video Clip from “Face To Face” and performs a DJ-Set as well. By end of the Year she is invited to perform along side “The New Angels” in Monaco and is officially introduced as the DJ, Producer and Remixer of the song “Singapore”.
Becoming more and more an Italian House Hold DJ-Producer, she participate at the Palazzo Visconti – Milan, At the World renown Gioia Moratti’s Anniversary event and in the presence of the entire Moratti Family including the Inter Milan Soccer President, Maurizio Moratti.
Then follows the entrance to the Consulate of Ecuador where she performs a live set in a Haute Couture fashion show, held at the National Journal “IL Sole 24 ore”, where she received a certificate as « the first lady DJ for Ecuador ».
In 2012 she performs at the Zurich Pride Festival.
In 2013 she joins the Label Milestone Records LTD and releases “Dancing On The Moonlight”,
“Believe In Me” and “Will You Please Me”, the last two, includes remixes by renown Producers,
Gabriel Wheel and Graziano Fanelli from Radio Studio Piu.
Finally after have toured and worked everywhere Pinklady returns to Italy in 2014 and performs at FIM Fiera International 2014 Awards Event In Genoa and returns in 2015 at the FIM DJ Festival Genoa.
The Year 2016 Pinklady is busy touring in all top Venues and Clubs, in France and on the Reunion Island.
Back from her Yearlong tour she returns to Zurich in 2017 and produces an 11 tracks full length Album titled “Was A Small Town Girl” A self reflection and story of hers, expressed in various electronic sounds and gems.
Djane Pinklady popularity comes from her Fabulous Stage Presence, excellent DJ-Skills and Flair in her Music programming.
2018 Djane Pinklady gets her first Overseas break and get signed by Florida Based Label
Power Of Love Productions, giving her an opportunity to widen her World presence and to take the USA by Storm.
In JULY 2018 PINKLADY, he is present with his Djset alongside great artists such as DADDY’S GROUVE and TAAO KROSS in the F*** ME I’M FAMOUS in Mykonos;